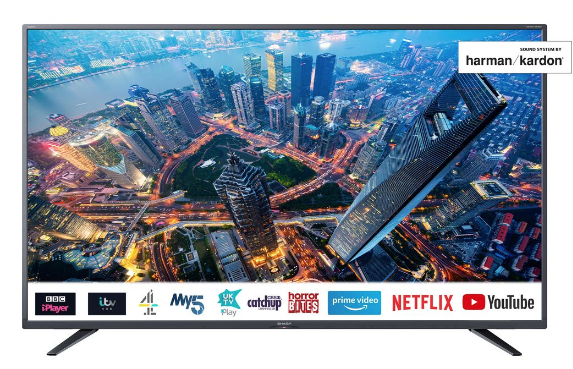 This was an impulse buy. We’ve been watching so much TV recently it was decided a second 55 inch 4K Television was required. We “live” in a room adjoining the kitchen once adequately served by a Sony 43 inch HD TV. Then for a Movie, or one of the “Blockbuster” Tv Series such as “Game of Thrones” etc, move into the sitting room and watch it on the Samsung 55 inch 4K TV that resides there. The SHARP 4T-C55BJ4KF2FB 55″ Smart 4K Ultra HD HDR LED TV was advertised as a LIDL special April 11. I was despatched on April 12 to purchase one, it was sold out. Recently I discovered the same TV available for sale in Currys for €379. So much for LIDL’s special offer .

Mainly the Price, this is a “second” Television so no need for “all singing and dancing” when the “First” one has that, however it has all the features required:

Delivered as promised, ordered on the Thursday before a bank holiday weekend, arrived the following Tuesday afternoon. The box had no packing tape on top which concerned me, however it looked as though it never had packing tape and the contents were complete and intact.

The holes for the bracket are at the bottom of the TV. This meant the existing bracket needed to be lowered, the old bracket from the 43inch fitted fine and was sturdy enough for the job.

Also from the above image you can see there are plenty of inputs and outputs for adding whichever devices you desire.

For the price this is a very nice Television, picture quality is excellent and it is fully featured, the only downside I found was the inability to add Disney plus, which could be a game changer for some.

The cables will be sorted later, I haven’t added all my devices yet!